Categories:The Art of Thank You Blog 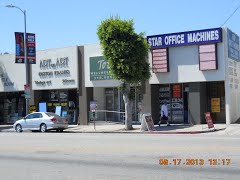 My typewriter mechanic, Ermanno Marzorati, is selling the business.  This is a crushing blow.

It’s like I’m losing my best friend.  I put on a black dress and went over there today to say “goodbye”.

He and his assistant have worked together for 34 years.

Ermanno says another company will take over his business — a “friend” — but he doesn’t know what he’ll do next.

I looked around the almost-empty shop.

Gone were the machines he’d labored over for years and years.

Gone were the portables in their battered cases.  The dusty beige Brothers that Staples mass produced.  The dark green Smith Coronas, the Remingtons with their shiny black bodies.  Gone, broken bodies and missing keys. An eerie graveyard with all the bodies missing.

I held up a  typewriter ribbon.  They’d carted out boxes and boxes of machines already.   I could see shelves with nothing on them.  It was like looking at a woman without her clothes.  I averted my eyes.  I didn’t want to stare.

“Where will I order these?” I asked, desperation rising, trying not to wail.  Finding a ribbon in town is like finding a unicorn.

No office supply store carries them.

I looked around, but there was no sign of Pedro.

“He’ll be back,” Ermanno promised.

The whole thing seemed very strange.  Ermanno with no plan.  Pedro in the back at a new store, at the whim of the new owner.

“The carriage is not working,” Ermanno diagnosed, bringing my attention back to my sick baby.  We looked at the ribbon that was no longer spooling.

“I lies there like spaghetti,” I offered, trying to make it seem more exciting.

I watched them fill out the last work order, and I made sure my phone number was listed.

Ermanno gave me a hug.  I told him I’d dressed up for him.  He apologized for the pizza stain on his shirt.

“You’re moving,” I empathized.  “I didn’t expect you to be tidy today.”

We didn’t say ‘goodbye’.  It was too painful for me, and I could tell Ermanno was weary.  The phone rang again and he walked off.

I left my typewriter in the darkened shop, and I felt like a bloodless mother must feel who abandons her baby in a dumpster. I didn’t want

to, but it was the best thing for it.  I couldn’t look back.   I will pick it up from Pedro when he calls.  In the meantime, it’s the end of an era…

and there will never be another Star Office Machines.